It’s been a while since TooStalky—a guy who frequently stops by my house and yells, “Lisa, Lisa” (which, by the way, is not my name)—has made his rounds.

The other day, MiniMe and I were sitting in the front room when we heard this, “Lisa, Lisa. Hello. Open the door. Hello.”

We did so and successfully avoided having to say, over and over again, “We don’t have any work for you right now.” 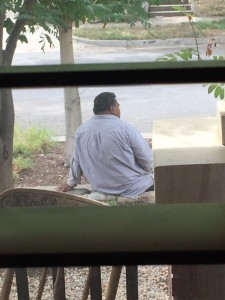 A few days later he returned and, as luck would have it for him, I was hanging out on the stoop with Rated R and Live Longer.

“Lisa, I need some work,” were the first words out of his mouth.

“Hi. I don’t have anything for you to do right now.” I replied.

“You need mulch,” he advised.

“I can do that myself,” said I, proudly.

“I will trim your trees,” he then offered.

“I can also do that myself,” I advised.

“You’ll cut off your arm. Come, let’s go take look,” he said and started walking toward by back 40.

As we walked he asked, “May I tell you something? You don’t get mad?”

“Sure,” I said knowing that with a disclaimer like that whatever he was going to tell me was probably going to upset me.

“You look fat,” he flatly stated then attempted, again, to convince me I should hire him.

I, politely, replied with a big fat “NO!”